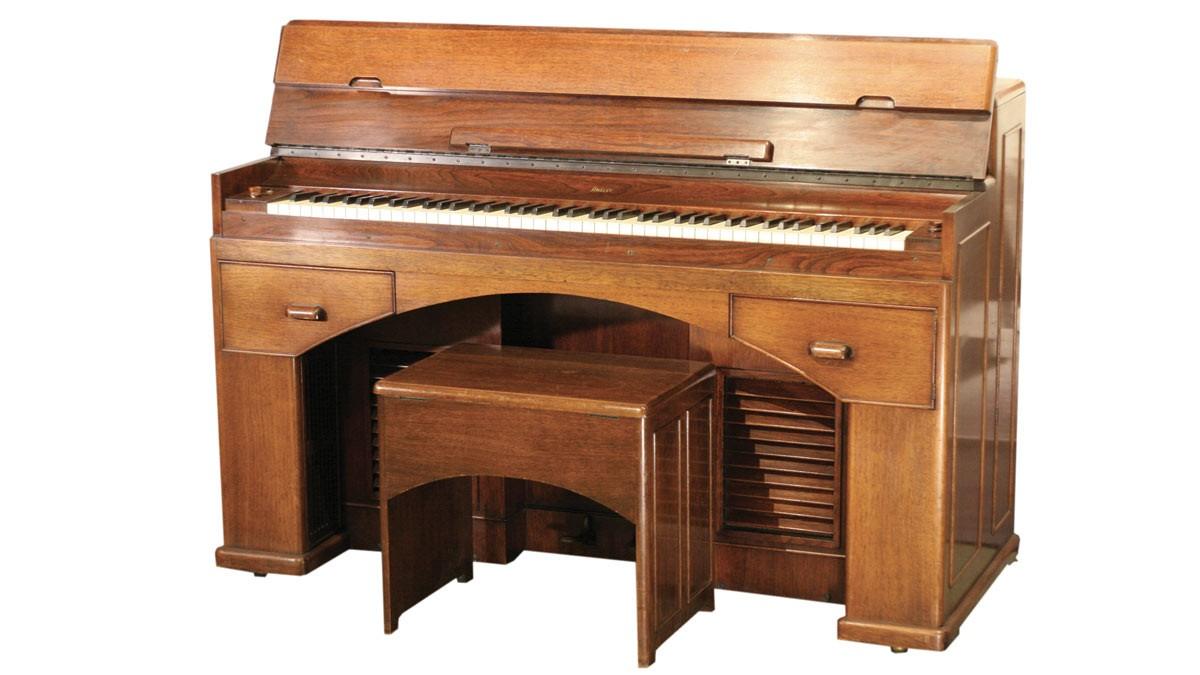 The 1930s saw an impressive number of experiments and innovations from the music products industry, many of them driven by the possibility of electrifying just about anything and everything. Where some of these innovations, like the Hammond Organ, made immediate and lasting marks on the industry, others largely fizzled. One of the more interesting examples in this latter category is the Ansley DynaTone.

The Ansley Radio Corporation, founded by Arthur Ansley, had some success in the 1930s with a product line called the Dynaphone, a combination phonograph and radio. Late in the decade, Ansley utilized its expertise in electronics to create another hybrid product: the DynaTone, a combination phonograph, radio, and piano, which was released in 1939. The DynaTone was marketed both as a good value ($595 in 1939, or around $10,000 in 2017 dollars) and as a piece of advanced, cutting-edge technology—not only electrified, but also capable of receiving then-new frequency modulated radio signals.

Though outwardly very similar to an upright piano, the DynaTone has no soundboard. Instead, a set of pickups mounted inside the piano convey the sound of the strings to an amplifier and then to a speaker—all inside the instrument. With the amplifier switched on, the DynaTone can be as loud as a grand piano. With it switched off, the sound is considerably softer; marketing materials referred to this as a “harpsichord” sound, adding yet another hybrid capability to the instrument.

The phonograph and radio portions of the DynaTone are cleverly tucked away in hidden cabinetry. A handle below the left side of the keyboard pulls out a drawer housing a phonograph platter and tonearm, and a handle below the right side opens a door concealing a radio dial and controls. These could be used at the same time as the amplified piano, such that the player could perform along with the radio or a record.

Production of the DynaTone ended in the 1940s. While a precise cause is impossible to pin down, the DynaTone’s success was likely hampered by its novelty, consumer tastes shifting toward smaller spinet pianos, and the onset of World War II, during which musical instrument manufacturing was effectively frozen nationwide. Nonetheless, the DynaTone is an amazing example of ingenuity and adventurousness, traits that have been central to the growth and success of the music products industry.

The Museum of Making Music’s Ansley DynaTone is a gift of Ed Marsh, who also helped to restore the instrument to excellent condition. Special thanks to Abel Sanchez (The Piano Place) for his work to refurbish this historic piece.