Multi-instrumentalist, composer, and arranger David Castañeda, PhD brings an evening of original music with influences from across the Americas and the Caribbean. His repertoire is characterized by a fusion of many different traditions, reflecting his study and career performing the music of Brazil, Cuba, and the United States.

The San Diego Sound Project has been made possible in part by The Conrad Prebys Foundation.

The Museum's live stream capabilities were enhanced thanks to a grant from the City of Carlsbad's Cultural Arts Office. 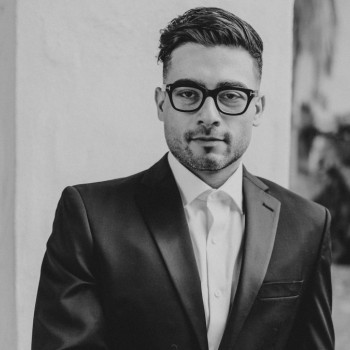 Upon graduating high school, David began studying music academically, emphasizing in Jazz composition and arrangement at the University of California, San Diego. He would go on to study and perform with faculty such as David Borgo and Mark Dresser, as well as GRAMMY award-winning producer Kamau Kenyatta, with whom David has worked with ever since. Outside of the university, David performed musics ranging from salsa to modern jazz, with artists such as Charlie Chavez, Richard Sellers, Joe Garrison, Gilbert Castellanos, GRAMMY Award-winners Curtis Taylor, Alan Philips, and many others.

David completed his B.A. in 2013 with honors, then was accepted into the Afro-Latin Master of Music program at California State University, Los Angeles. There he would study under Calixto Oviedo and Euro Zambrano, earning his M.M. in Afro-Latin in 2015. In that time, David continued to work in genres ranging from Latin American dance music to modern jazz, with various bands in the San Diego and Los Angeles areas.

The Museum has updated its COVID-19 safety protocols for all concerts taking place at the Museum of Making Music. Effective immediately, concert attendees will need to do one of the following:

What you need to know: