Albert Lee is one of the most respected and renowned guitarists in music history, having worked with the Everly Brothers, Eric Clapton, Emmylou Harris, and The Crickets over his long and illustrious career. The British-born country-rock artist started his career during the emerging rock 'n' roll scene of sixties London, when he swapped bands with the likes of Jimmy Page and Chris Farlowe.

After moving to the U.S. and assimilating himself into the country music scene, Albert quickly garnered a reputation as one of the fastest guitar players in the business. He recorded a number of solo albums, and won a GRAMMY in 2002 for his contribution on 'Foggy Mountain Breakdown'. He continues to tour today, and plays his signature Ernie Ball Music Man Guitar. 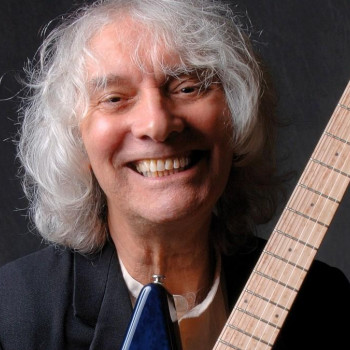 Known for his fingerstyle and hybrid picking technique, Albert has not only worked with some of the biggest names in music such as Eric Clapton, Joe Cocker, Everly Brothers, and Emmylou Harris, he has maintained a prestigious solo career of his own. Spending over 50 years in the business, he is one of the most respected guitarists in the country-rock music scene.

Albert’s musical career began in England in the 1960’s where he played with bands such as The Crusaders and The Thunderbirds. He soon found himself in Los Angles where he was quickly picked up to play with Joe Cocker and then Emmylou Harris. After releasing his first solo album in 1976 featuring “Country Boy” with Emmylou on backing vocals and Ricky Skaggs on fiddle, Albert would go on to work with Eric Clapton for the five years. Shortly thereafter, Albert would fulfill his boyhood dream to play with the Everly Brothers in 1983 when he acted as guitarist and musical director for their reunion concert at the Royal Albert Hall. He would regularly tour with the Everlys on and off for 20 years.

Albert toured with Hogan’s Heroes through the late 80s, he began his long association with Ernie Ball Music Man, who would eventually (through many iterations) produce his signature guitar that he tours and records with today. In 2002 he would join Eric Clapton, Tom Petty, Paul McCartney and other music legends on stage at the Concert for George at the Royal Albert Hall.

Albert also received a GRAMMY Award in 2002 for his contribution to “Foggy Mountain Breakdown” featured on “Earl Scruggs and Friends.” He appeared at Clapton’s Crossroads Guitar Festival in 2007, now an annual appearance, and has toured periodically for the last few years with ex-Stones bassist Bill Wyman’s Rhythm Kings, performing with Georgie Fame. Joining his hero James Burton, along with the likes of Vince Gill and John Jorgenson, Albert won a GRAMMY for his performance on Brad Paisley’s instrumental “Cluster Pluck” in 2009.

The health and safety of our patrons, performers, staff, and volunteers is our top priority. The Museum has updated its COVID-19 safety protocols for all concerts taking place at the Museum of Making Music.

Effective immediately, concert attendees will need to do one of the following: